A few years ago – while strolling through IKEA – i bought two sets of IKEA Dioder RGB  LEDs. Then the ESP8266 32Bit Microcontroller became very popular. Now, i am running a FHEM Server for quiet a while. Eventually the idea grew to controlling the LED Strips/Bars via an ESP12-E from FHEM. At the very beginning i figured i would also have to write a perl module for FHEM to integrated with my ESP but it turned out an antsy guy from Hamburg already created one called Wifilight. It works for a dozen devices and so i just had to pick one and interpret what Wifilight is sending. A bit of browsing the code, googling and digging through the FHEM Forum turned out the LW12 LED Controller (german) implementation might be the one to try.

The Finished Project In Motion

The basic outline of the steps involved is fairly straight forward:

Sidenote: If you do not have IDEA Dioder LEDs and intend to do a project like this…DO NOT BUY THEM! There are cheaper and better LED strips out there. The circuit and the code might have to be different in that case but there is plenty of information on the web on how to control other LED strips.

I will not explain a lot about wiring the ESP. This can be easily looked up all over the web and most sources will say you need to pull up/down various more pins than i did. But the setup below works very well for me. I consider components like FTDI-Converters, breadboards, resistors, capacitors and all sorts of tools as given.

ESPs can’t stand input voltages over 3,3v. Also, all output voltages max at 3.3 volts logic level.
Always keep in mind that we are using 2 power rails because the LEDs work with 12 volts.
The layout of the ESP12-e does not fit strip-/breadboards so you could either solder your own IO adapter board or simply buy one.

This layout shows my final setup. The button is used for resetting the ESP (because i had to do that a lot :) ) and the J1 male header pulls GPIO0 to GND which is necessary for programming. The connections for the FTDI module are missing here. MOSFETs Gate shouldn’t be floating so i used 10k resistors to pull them to GND. The voltage regulator (upper right corner in  this picture) mentioned at point one got worrying hot for me so i simply attached a heatsink dismounted of an old mainboard. Please pay attention to GPIO15, it is connected to GND directly on the IO-Adapter of the ESP. 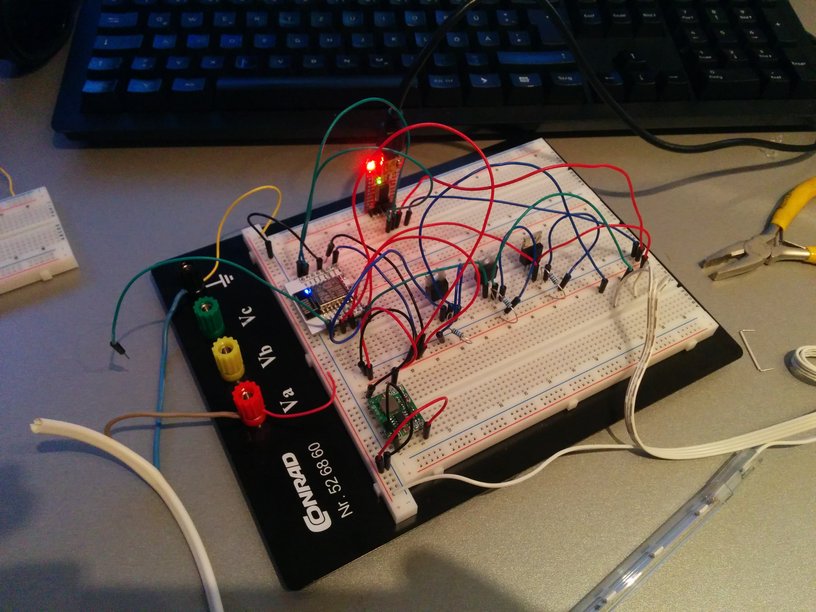 In reality the setup doesn’t look nearly that clean. I used a different step-down module to get 3,3V for the ESP while testing and programming the circuit. 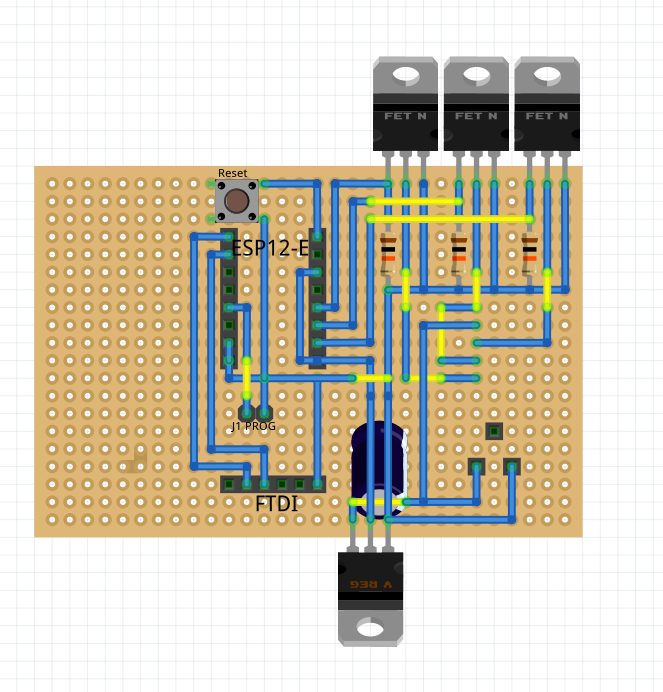 Placement and wiring of all components for the final drilled board. Yellow wires are all run on top used to bridge unavoidable crossings and blue wires are going on the bottom of the board. The 3 single pin headers in the lower-right corner are used to represent the connection points of the 12V power supply. The 4 wires right above this headers are connected to the LED Stripts in bottom to top order: Red, Green, Blue, +12V 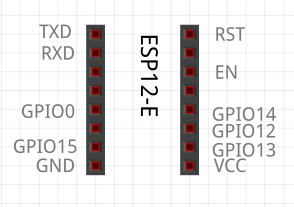 In the final layout the ESP was mounted upside down. So the pins align as shown in the left image. The picture on the right shows the FTDI connections of the header.

I was excited about the fact that the ESP8266 can be programmed using LUA. But there are multiple statements saying LUA renders the microcontroller rather unstable. So, without further ado and no verification whatsoever i gave Arduino’s C/C++ slang a shot and stuck to it. 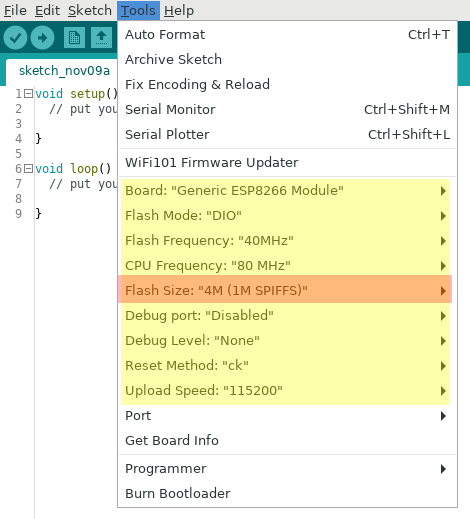 Line number 7 – 9 defines the GPIO pins to use for the MOSFETs Gate. ESPs have 10Bit PWM hence the maximum value for ~3,3V output is 1024 on lines 12 to 14. Line 17 – 18 takes the Wifi’s SSID and password. 21 to 22 defines a new object for our TCP Server we actually send our desired values to. Line numbers 26 and 27 define an HTTP-Server on port 80 for OTA-Updates.(I figured i’ll easily be annoyed by getting that little thing down the cupboard every time i decide to flash new software. So, being able to program it via HTTP with just a short curl-command is a feature i wouldn’t wanna miss anymore.)

Teaching FHEM about the new “esp-ikea-led” is by far the easiest part.

It might be necessary to play a bit with the attributes set by default: 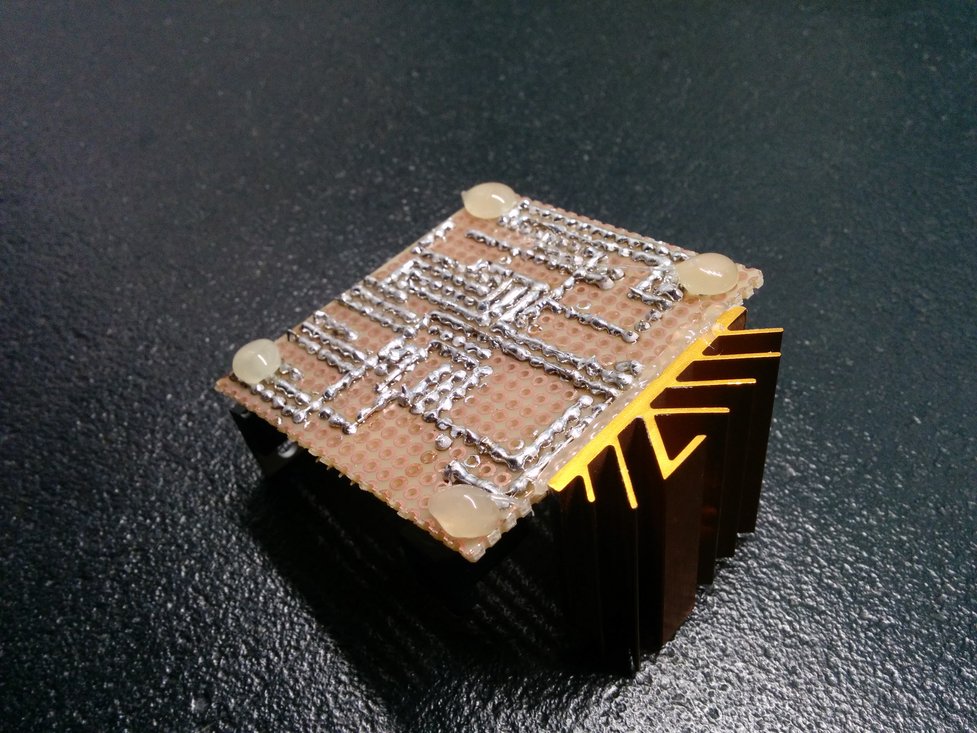 As you can tell, soldering is not exactly a point to put on my “Strengths List” but it worked straight from try one. I have to admit that i was surprised because i expected at least a few shortenings. 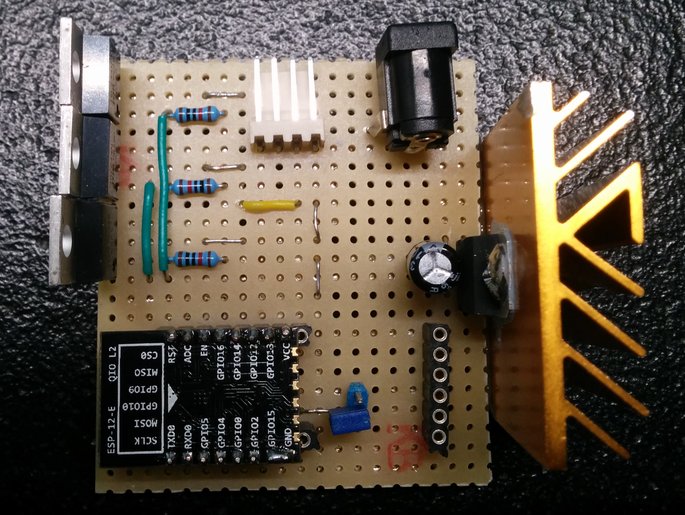 As mentioned earlier in that post, i used an old heatsink borrowed from a mainboard to cool down the voltage regulator. It is oversized and makes the whole circuit-board chunky.

3 things i immediately regretted on that board 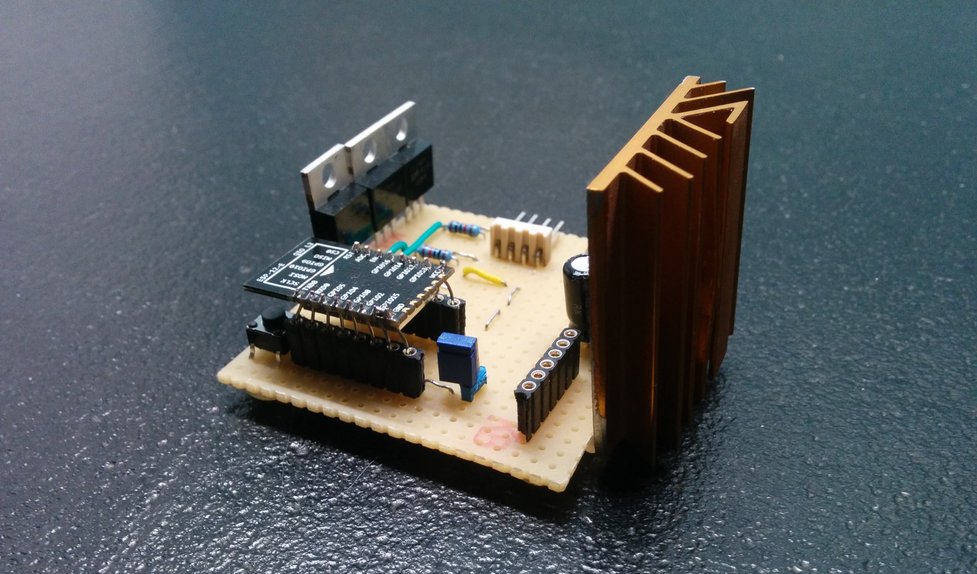 Well, i can’t say it’s ready for production line but i sort of like how it turned out. 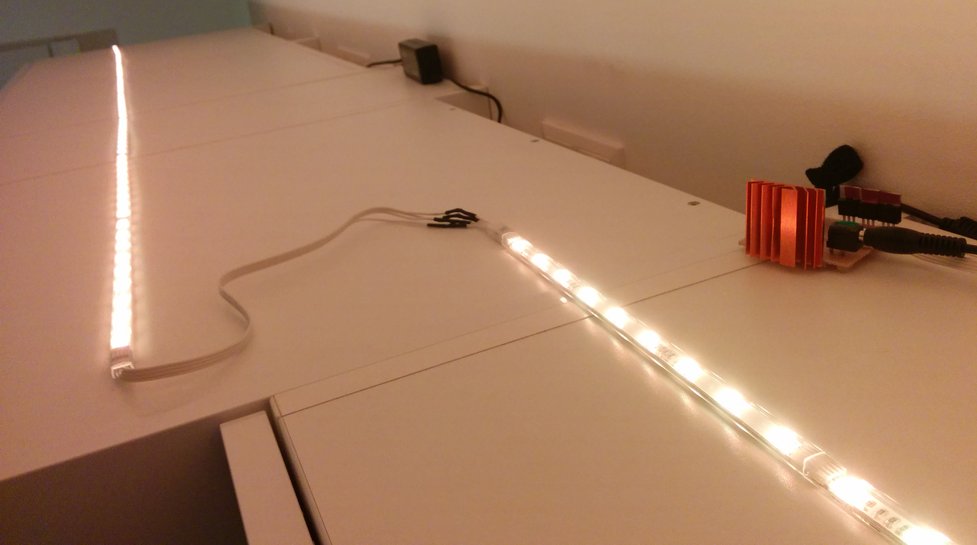 Moved to it’s new home…on top of the cupboard. 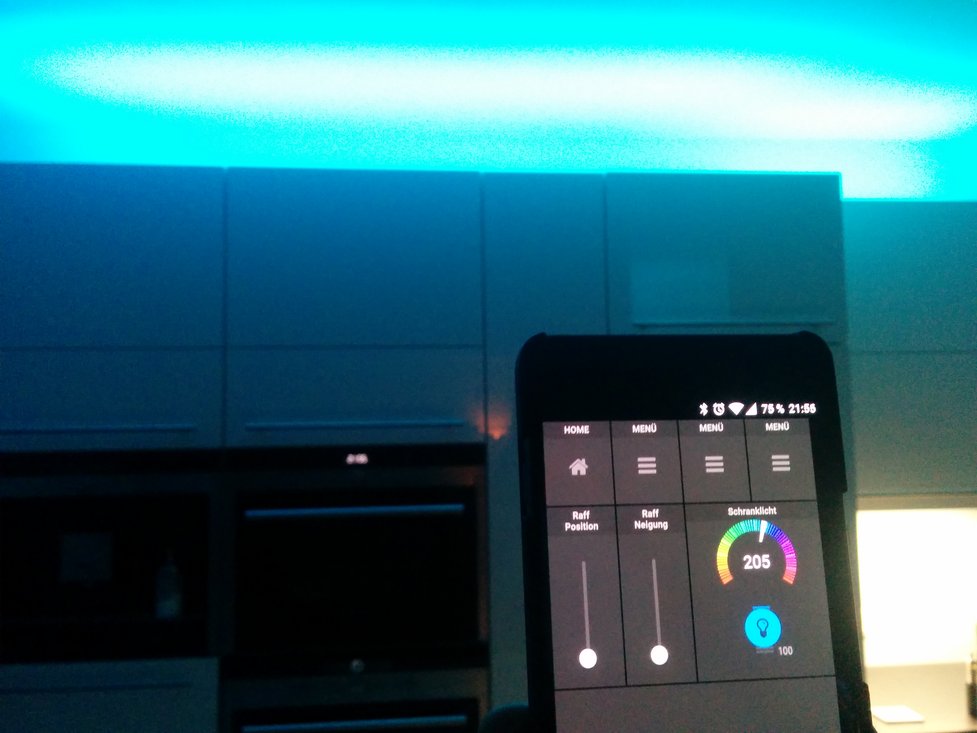 In the end…there is light.

This site uses Akismet to reduce spam. Learn how your comment data is processed.